At least, a real debate on climate change (I hope)

Slowly the Western world is facing up to the real possibility that the catastrophe that was supposed to lie in wait for us, as a result of our use of fossil fuels, might have been over-egged, and that climate change may not even be accessible to human action, let alone caused by it. Germany is having trouble with its push to make alternative sources the core of its electricity production. China has stopped subsidizing solar panels. A newly elected provincial government in Ontario is set to wipe out carbon-pricing rules. The UK has seen two weeks of nil power from its offshore wind turbines. And in the USA there has been a public debate between two proponents for each side: Michael Mann of the hockey stick and David Titley, a meteorologist formerly of the US Navy, for the warmists, and Judith Curry, well known to sceptics, and Patrick Moore, former President of Greenpeace Canada, for the pragmatists, realists, sceptics, call them what you want, though not, please, ‘deniers’. Patrick Moore was one of the founders of Greenpeace, but has since declared that the organisation has been taken over by scaremongers and disinformers. The debate, at  local university, was organised by a legal firm in Charleston, Virginia, and you had to pay something to attend.

Judith Curry has published her own contribution to the debate, and you can read it here. It is such a sane and sensible statement that I am devoting this essay to it, but of course you should read the entire statement, which is too long for me to publish. I am writing as the debate is starting, and there will be more to say when it is finished, and we have had several accounts of it. But here is the core of her statement. She starts with what she sees as the main areas of agreement and disagreement, first agreement.

However, there is substantial disagreement about the issues of greatest consequence:

I have bolded the two issues that are the focus of this conversation.

Now there is nothing wrong or bad about scientific disagreement.  In fact, the scientific process thrives in the face of disagreement, which motivates research in new directions.

You can express all this in a simple diagram, which she does (an earlier version is here):

If that is isn’t enough, she adds a cartoon, which I like. People tend to look at this or that aspect of the elephant, but not at the elephant as a whole.

The debate matters, she insists. Oh yes, it does. Look at electricity prices. Look at the slow winding down of attempts to replace fossil fuels with alternative energy sources. Look at the avoidance of nuclear power. A third diagram (there are several more in the contribution itself): 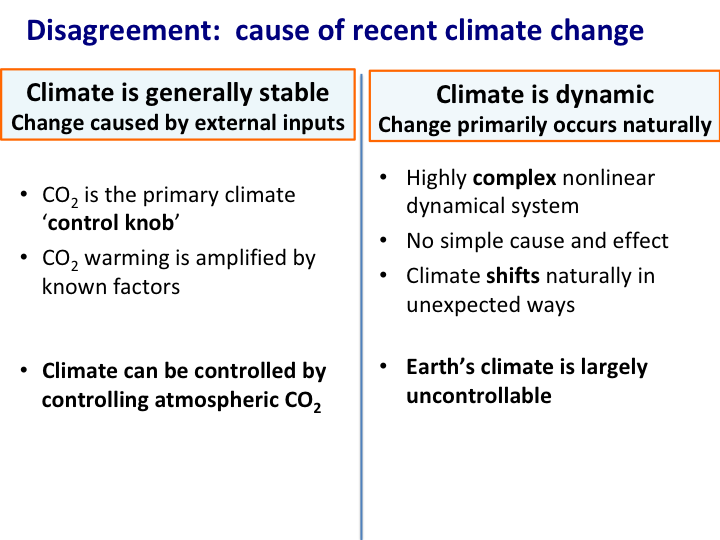 She makes the important point that most, a big most, of the research that bears on this issue has been focused on carbon dioxide and its role, rather than on sources of natural variability. And the result is that we really don’t know much about the causes of a change in climate.Why not? The bottom line is that we don’t yet have a unified theory of climate variability and change that integrates all this.

And what do we really know about sea-level rise? I found this part of her contribution to be most important, if only because I have spent a lot of my time on it too. She points out that Michael Mann and James Hansen have both made sweeping claims about the importance of sea-level rise, for which there is no support from scientific evidence. Here is a pointed graph (yes, from a peer-reviewed and much cited journal article):

On that evidence, carbon dioxide emissions simply can’t be responsible for sea-level rise in the last century. Then what is causing the slow rise that we see? The major part seems to be coming from melting of the Greenland ice-cap. Yet there is abundant evidence to show that the Greenland ice-cap melted in similar fashion in the 1930s, indeed, there was rather more melting then than is occurring today. That 1930s melting could not have been caused by carbon dioxide emissions, but looks as though it is related to the AMO, the Atlantic Multi-Decadal Oscillation, a long cyclic change that affects climate. Once again, we don’t know enough about it, and one reason is that it is not fashionable to study it.

The panelists in the debate were asked ‘to what extent are man-made CO2 emissions contributing to climate change?’ Dr Curry’s response is that we don’t know.  The reason is that we don’t know how to disentangle natural internal variability from the effects of CO2–driven warming. Back to square one. Should we be reducing emissions to prevent warming? There is a clear division between the two groups here. Her view is that the best way forward to is to keep economies strong, ensure that energy is available to everyone (which means it needs to be cheap) and focus on resilience. To expand:

What makes most sense to me is Climate Pragmatism, which has been formulated by the Hartwell group.  Climate pragmatism has 3 pillars:

These are no regrets policies that do not require agreement about climate science or the risks of uncontrolled greenhouse gases.

And finally, a statement on what she calls ‘the Madhouse effect’.

I would like to make a few comments on the state of the scientific and public debate on climate change. Here is my take on the Madhouse effect.  The madhouse that concerns me is one that has been created by climate scientists.  The madhouse is characterized by

Most of what she says was my position before I ever heard of Dr Curry, but because she is a well-published and sensible scientist I have been reading her website ever since I discovered it, about 2012. It is the case, for these reasons, that I think her contribution to this debate deserves to be read far and wide.

ENDNOTE  One audience member has posted on WUWT to the effect that it wasn’t a real debate, but more a set of positions presented by the four speakers, and questions thereafter. I was in one such event a few years ago in Melbourne. I felt it was unsatisfactory.