Are the seas rising? My perspective on ‘climate change’ #6

Of all the consequences that a warmer planet might bring, the one that gets the largest media shock/horror buzz is the prospect of rising sea-levels, as (some) ‘scientists’  predict that bigger seas will flood coastal communities, submerge coral islands and drown countries like Bangladesh. Greenland will melt, Antarctica will melt, glaciers will retreat even further. We are doomed, unless … It’s just too good a story to spoil with inconvenient data. In fact, as I said eight years ago, there’s just no evidence of anything like this happening. Not one of the fifty million climate refugees predicted for 2010 by the UN Environment Program in 2005 has been found. Another man who personally claimed in 2013 to be a climate refugee has had his claim dismissed by the courts in New Zealand. 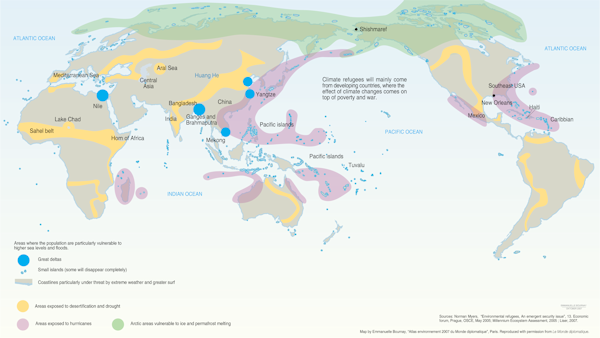 This map shows in  blue the coral islands that will disappear, the pink shows areas subject to hurricanes, the blue circles are large deltas where flooding would occur, and the yellow patches identify areas subject to drought. It was said to be going to happen. It’s a worrying map, and it was intended to worry people. I use it and mention its origin because it is probably the best example of the unfounded ‘scare’ about global warming. It was a complete fantasy. How could anyone with sense have put it out? The UNEP finally pulled it off their website in 2011, and the 50 million refugees claim as well. Unfortunately for the UNEP you can find it elsewhere. It won’t go away.

Are the seas rising? Yes, they are. They have been doing so for several hundred years. Sea levels may have been rather higher in the human past. There are two connected methodological debates about sea levels. The first is whether one should use satellite data or tide-gauge data to measure whatever rise is occurring. The second is whether global sea-levels have any meaning, given that each point on a coastline is affected by different conditions. Land can sink, land can rise, and in each case apparent sea levels will be different. There are many variables involved in measurement, and you can read about them here.

At the highpoint of the scare governments were inclined to use the IPCC predictions of about half a metre increase (double that if you took a worst-case scenario) by the end of the century as a benchmark, and looked at all the awful possibilities should that figure be reached. The IPCC projections are based on satellite measurements, which show a recent apparent acceleration in sea-level rise, while tide gauges don’t. In fact the Fort Denison tide gauge in Sydney harbour, one of the longest-serving in the world) shows very little increase in sea levels at all — about 0.65 ± 0.10 mm/yr for the past 128 years. It is the trend that is important: about 6 centimetres per century, and not anything to worry about.

With the scare subsiding, two governments at least, those of NSW and Queensland, have told local councils that they should use the best available local knowledge, especially local tide gauges, as their point of reference for future sea-level rises, not the IPCC’s projections. As a ratepayer, I advised the Eurobodalla Shire Council along the same lines. Councils can feel vulnerable to court cases based on what might happen and what has happened, and they need some protection. If they go too far along the IPCC path they will cause dramatic falls in property values, and great public fuss. Councils usually have a Green councillor or two for whom greenhouse gas emissions and sea-level rises are much more important than anything else. It’s a difficult situation for any coastal council.

Of course, there is much more to the whole sea-level issue than measurement, though it is central. The basic argument behind the scare is that the world is getting warmer and that a warmer sea will expand in volume. In addition, a warmer world will lead to more glacier-melting, and more ice-loss from Greenland and Antarctica. So the oceans must rise. The IPCC says that It is virtually certain that global mean sea level rise will continue for many centuries beyond 2100, with the amount of rise dependent on future emissions. I would agree with the tendency of the first part of that sentence, since all the evidence suggests that the seas have been rising slowly for a long time.

I would not agree that greenhouse gas emissions have a lot to do with it, for the data don’t really support the IPCC position. Coral islands are growing in size, not sinking. Bangladesh is adding land every year as the Irrawaddy creates more islands. The Antarctic remains stubbornly and solidly frozen, and recent winter sea-ice extents there have been enormous (last winter’s was around 20 million square kilometres, about two and a half times the area of Australia). Greenland gets a lot of snow — much more than the Antarctic — and while it is losing some ice at the side it is gaining it on top. I wrote about the astonishing depth at which some Second World War aeroplanes were discovered years after they had landed on the ice (83 metres in 44 years). There are few instrumented glaciers; some are retreating while others are advancing. In any case, the amount of sea-level increase that could be attributed to glaciers is very small. Nonetheless, those who feel that the IPCC is right have done their best to try to show that the increases are going to come. It is an article of faith for them. I am unpersuaded by the results.

If the world were indeed warming at at the rate at which the IPCC said it would, then there might be something it it. But even with the current el Nino there has been, in the new century, nothing like the warming of  the 1975-1998 period, while of course el Ninos are not caused by greenhouse gas emissions. The whole picture of a world heading to a watery grave rests on the assumptions that CO2 is the control knob of global temperature. If CO2 goes up, temperature must. But as we have seen in earlier posts in this section, it is not at all clear that CO2 is the control knob. Not only that, the relationship between CO2 and temperature is not linear but logarithmic, which means that most of the increase in temperature due to this cause has already occurred.

Further reading: I have written a dozen posts on sea levels and you can get to them by using the magnifying glass icon at the top right of the website page and typing in ‘sea levels’. I greatly appreciate the work of Dr Tony Brown on historic sea-level measurements, and you can read his work there and on related matters by going to the Climate etc website and searching for him. Warning: if you look for ‘rising sea levels’ on the Internet you’ll get about 14 million hits.

Next: How useful are climate models?

Footnote:  A useful collection of essays on this subject can be found on Judith Curry’s website, here.