Are human beings causing the warming? My perspective on ‘climate change’ #5

We have come far enough along this road for a short recapitulation of the story so far. I came into reading, thinking and writing about AGW, or ‘climate change’, some ten years ago, and was doubtful from the beginning: too much speculation on too little real data. The AGW scare started about 1988, and quickly built up momentum, in part because temperatures were rising in apparent lockstep with carbon dioxide accumulations. Before long there was an IPCC, a precautionary principle, and lengthy assessment reports on what carbon dioxide was doing to our climate.

For a while politicians and electorates were obsessed by the scare, then the Global Financial Crisis took over the front pages, and the scare lost its way. It has never really recovered, but enough institutional inertia remains to cause ‘climate’ to remain both a media interest and an occasional political issue. The core argument inside the scare is that we humans are changing the climate through our own activities, principally in burning fossil fuels. Warming must increase, and in doing so will have dire effects on other aspects of climate, like precipitation and storms. We must act now, before it is too late.

Is the earth warming? Well, it depends on what timescale you are thinking of. On the evidence, which is admittedly scanty, we are in an interglacial period which is not as warm as some previous ones. In this interglacial, the Holocene (which some want to call the ‘Anthropocene’ because they think this is the first period where sentient beings have altered climate — but see below), it looks as though the warmest part is behind us, some thousands of years ago. On the evidence, again, it looks as though there has been some warming, in spurts, since about 1850. Before that temperatures seem to have been much cooler. In the Mediaval Warm Period temperatures seem to have been about the same as today, in the Roman and Minoan warm periods, perhaps a little hotter.

Now read on: Have human beings actually caused the warming — or, rather more usefully, how much of the warming since 1850 have they and we caused? The IPCC has no doubt at all. The Summary for Policymakers of the IPCC’s AR5 (2013) says, at D.3:

Readers should note that ‘extremely likely’ in this statement means that those who wrote the statement assert that the probability of their being right here is more than 95 per cent (not that the probability of their being right is 95 per cent). I object to this sort of language, which gives the impression that real data show this to be the cause, and that it is not simply the opinion of the writers. Readers might also note that the baseline is now 1951, during a cooling period. Why not 1900, or 1850? My explanation is that starting at 1951 removes the need to explain a similar warming period between 1910 and 1940, when carbon dioxide is not thought to be important.

The question of the ‘attribution’ of global warming is perhaps the clearest case of  the science not being settled. To begin with, there is no paper that clearly shows the link, despite the passing of nearly thirty years since James Hansen warned the US Senate of the doom to come. The scare picked up its momentum from the similar trends in carbon dioxide and average global temperature from 1975 to 1998. It’s best explored through the following graph, which shows carbon dioxide in the jagged red line, and global temperature anomaly in the blue. The graph runs from 1960 to the end of 2014.

The details don’t really matter. The IPCC claims that the warming from 1951 is mostly due to human activity, and it may be. But if the IPCC is correct, then what caused the similar warming trend from 1910 to 1940 shown in the third graph in essay #4? And why, given the great expansion of industrial activity in the postwar period all over the world, was there cooling from 1940 to 1975? It was graphs like this that originally made me shake my head at the confident attribution of warming to human activity.

The general response from the IPCC in its Third Assessment Report (inasmuch as these questions were dealt with at all) was that something called ‘internal interactions between components of the climate system’ accounted for the wobbles you see in the graph, until carbon dioxide took over triumphantly in 1975. It was quite vague about the nature of these ‘interactions’, and especially vague about the timing issue. The most recent AR5 SPM simply ignored the whole issue. Human activity was stressed to the exclusion of all else.

Many sceptics think that the IPCC has dodged the issue completely and that everything that follows is thereby flawed.  There is a counter argument, put forward by John Nielsen-Gammon, the Texas State Climatologist. He has argued with Judith Curry that if the sources of natural variation are cycles of some kind they must in time cancel out, whereas the effects of increasing carbon dioxide will keep occurring, pushing the climate system out of its usual equilibrium into a new warmer one. Natural cycles, like the Pacific Decadal Oscillation and el Nino/la Nina fluctuations, have a cooling phase and warming phase. When they are over, nothing has changed.

Judith Curry and others have proposed a further hypothesis, that of the stadium wave, in which long-, medium- and short-term cycles interact with each other in unexpected ways (unexpected because we don’t know a great deal about any of them). And what if some of the forces are not cycles at all, but solar influences, like the ‘solar wind’? Her conclusion, which is also mine, is that the influence of anthropogenic effects cannot be as great as the IPCC makes out, which suggests that we should be spending much more time and effort in exploring what ‘natural variability’ is is all about.

My take on it all is that humans and their activities do have an effect on temperature, but it is by no means the be-all and end-all of ‘climate change’. If I had to guess, and it would only be my intuition, after some years of looking at the data, I would plump for a proportion less than half of the observed increase. Nor should the level of warming be especially worrying, an issue I’ll take up in a later essay. Human beings have been managing their environments for a very long time, in an effort to make life more enjoyable and productive for them, and their efforts have produced the planetary environment in which 7 billion people live and work, most of them decently fed. We humans do make mistakes, but we learn from them, and we will continue to do so.

Next: Should rising seas be a worry?

Further reading: There is a great deal about attribution in the blogosphere. Judith Curry has devoted a lot of her website to questions revolving around attribution and uncertainty, and she has certainly done so cogently. Her position is that we know much less than the IPCC pretends we know, and while that is the case, the IPCC’s confidence about everything should be taken with a lot of salt. The effect of warming through increased carbon dioxide is logarithmic, which means that significant temperature increases will take a very long time even if the IPCC is right about everything.

The graph above, and so much of the debate about the last 150 years, depend for their validity on the quality of the temperature data that we have. The regular adjustments to that data, very often unexplained to the general public, produced the following cartoon, another fine example of Josh’s pen. 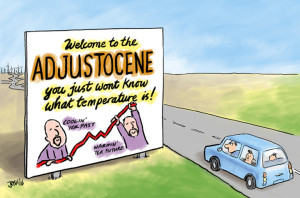 Late Footnote: There is an interesting essay on WUWT which tries to quantify the human effect, and suggests that it amounts to about 80 per cent over the last century. It is nonetheless a correlation=causation argument.