A road trip in the Kimberley

For much of September I have, with twenty other people, been in the Kimberley, the northernmost region of Western Australia, 0n an Outback Spirit tour. We used Outback Spirit to explore Lake Eyre when it was fullish in 2010, and enjoyed the experience. Our fellow passengers on the Kimberley tour were a pleasant and enjoyable bunch, while our driver Martin was resourceful, dependable and funny. The trip was carefully planned, and Outback Spirit did it all in style. What more could you ask for?  There was so much to see and experience that what follows is only a tiny sketch. I’ll devote a whole post in the coming weeks to the Aboriginal issue, not in the Kimberley especially but across our country, because there was so much to see and think about in that domain.

These trips are not for the faint-hearted or the luxury-loving. We were on the last trip of the season, and the heat from about ten in the morning until four in the afternoon was intense. For the most part we ‘glamped’ in tents on platforms that came with their own shower and toilet, but air-conditioning was rare, and indeed some resorts relied entirely on solar power, which meant no electric shavers, hair-dryers or kettles. We awoke about five-thirty am, and went to bed about eight-thirty pm. During most days we had walked in the sun to a special place, and walked back again. Given that most of us were over 70, that was an effort. We ate hungrily, and well.

OK. Some scene-setting. The Kimberley is bigger than Germany and not as big as France. It has two main roads, one the Great Northern Highway, which is sealed (‘black-top’ to the locals), the other the Gibb River Road, which is mostly gravel. The other roads leave from these two, and were worse. One passenger’s FitBit told him, after an hour or two of corrugations, that he had walked ten thousand steps, his goal for the day. The two main industries are cattle and tourism.

People go there in large part because of its extraordinary physical attractions, the result of its geology. The Kimberley banged into Australia a long time ago, and the collision caused the lifting of a series of mountain ranges which in time eroded, tilted and buckled. Coral reefs in the air, gorges three hundred metres deep and one metre wide at the base, a waterfall that drops into a cavern, tidal torrents called the ‘Horizontal Falls’, a giant music bowl behind a pool, Lake Argyle damming the Ord River, the 65 km stretch of Ord River from the dam wall to Kununurra, the Mitchell Falls, best seen from a helicopter (yes, we all did), the Bungle Bungles(the term actually means a kind of grass characteristic of the area), other gorges, swimming holes, pearl farms — I have never seen so many natural wonders in so short a time. Yes, getting to them was an effort, but it was always worthwhile.

The Kimberley is dominated by its climate, which is monsoonal. We visited at the end of the Dry. The Wet will start in November, and all being well will drench the whole region. All the camp sites will be under water, the tents, furniture and bedding all safely stored away in sheds on high ground. The Gibb River Road will be impassable for a few months, and the Great Northern Highway will be closed in places until the water recedes, despite the bridges that have been built. Transport will be by boat and helicopter. Most of the staff we met in our various camps have April to October contracts, and go elsewhere for the Wet.

The geology of the Kimberley means that much water from the Wet is stored in the rock, and emerges as springs. Even at the end of the Dry some streams were still flowing, if sluggishly, and without them there would be no cattle industry. But the high-water marks that you can see in some of the gorges, several metres higher than the present level, give you some idea of the force and size of the floods that occur, and can cover large tracts of land. I’ve seen nothing like them elsewhere, save at Katherine in the Northern Territory and along the Cooper in Queensland and South Australia. Water shortage leads to  signs like this one in one of our toilets: Frogs like water, Snakes like Frogs. Close the Lid!

The total population of the Kimberley is about 50,000, with 16,000 in Broome, and small thousands in Derby and Kununurra. Wyndham, where five of these Wet-swollen rivers discharge into the sea, is hardly more than a village. These towns are just different, their houses surrounded by trees for shade and protection, nearly all single-storey (Broome has an ordinance requiring all houses to be no higher than a palm tree). No one is interested in street appeal! The reconstructed Durack house we visited near the Argyle Dam was made of stone, very thick, with wide verandahs. It was mercifully cool inside. Imagine a rectangle with a line down the middle of the long side and two lines evenly spaced across the short side. These were corridors. Open the doors on both sides and any breeze goes right through the house.

From the time we arrived until the time we left we were never out of sight of smoke, and in fact the prospect of a bad fire caused us to miss two of the landmark sights we were intended to see. While driving we passed through a vast amount of burned land — control burned, not wildfires. Yet there were signs everywhere. ‘Don’t Set the Country Ablaze’ was common, and in Aboriginal communities. Bill Gammage’s book on Aboriginal fire practices (The Greatest Estate on Earth) is a great read, but one begins to feel that some of the Aboriginals in the Kimberley need to read it.

Fire makes best sense just before the Wet, not several weeks before. It was used to attract game to water and green pick, the shoots that come after a fire. But there is little hunting today. It was used also to keep the fuel load low, and thus avoid the intense hot fires that kill everything. What seems to happen now is that those who want to light fires do so at will. There is still controlled burning, but there is also haphazard lighting as well. The kites that hover in the sky have learned to pick up smouldering embers and take them into unburned areas. Their interest is in snakes and lizards.

Finally, regions like the Kimberley depend very largely on the grey nomads, retired people who have some discretionary money and use it to travel. That term applied to all but two on our bus, I should think. To look after us are young people in their early twenties, many of them from overseas in the first or second year of their work visas. They work hard, and they seem to love what they do and where they are. Get them going, and they’ll tell you how magical, how extraordinary, this part of Australia is, and how much they value being there. I remember talking to a young German somewhere between Broken Hill and Cobar, who pointed to the vastness in front of us and said, ‘No one in Hannover could imagine such a scene as this, and I live with it every day.’

After two weeks and two days of the Kimberley I was conscious most of all of the sheer immensity of our country, and of its strange beauty. I doubt that we will go there again, but I will hang on to the memories, and the photographs!

ENDNOTE: The photo shows the Wet-level high-water mark in the Geikie Gorge near Fitzroy Crossing. 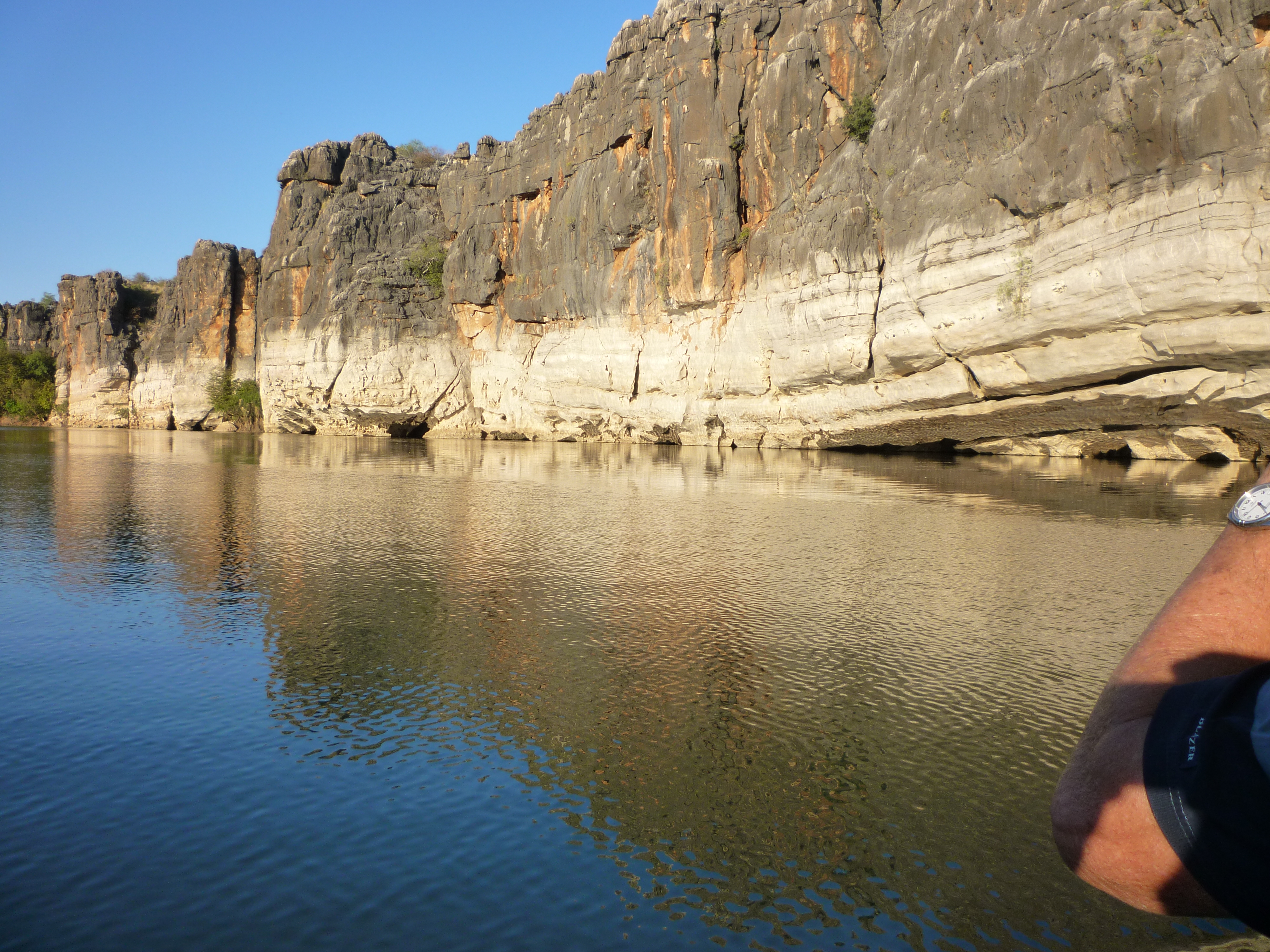