2017 was not at all my happiest year, though I can feel strength coming back in the sixth week of my recovery from double pneumonia. And while I was ill Australia’s industrious electors discharged their duties in Queensland and in the Federal seat of Bennelong, about which I wrote nothing at all. So perhaps I should venture a comment or two there.

All I really observed with respect to the Queensland election result, and that from television, was that the Labor Government had been returned, with a massive swing against the Liberal-National Party Opposition. I thought I ought to have a proper look at the data, and fortunately the Electoral Commission has completed its work. The swing business is somewhat more complicated than the news suggested. In 2015 the LNP was in power, and had enjoyed a previous massive win in the defeat of former Premier Anna Bligh in 2012, when Labor was left with only seven seats. The outcome in 2015 was the L-NP’s narrow defeat, and the return of a minority Labor Government. Labor had won only 37 per cent of the vote to the LNP’s 41 per cent, but scrambled over the line with the help of the Greens (8 per cent). One Nation achieved a whole 1 per cent, and the Palmer United Party (remember them?) picked up 5 per cent.

In November this year the battle lines were different. Palmer’s party had disappeared, and while indeed there was a swing of 7 per cent against the LNP there was also a swing against the Labor Party as well, of 2 per cent, meaning that the major parties each won just a little more than a third of the vote. What had caused this? Well, One Nation had picked up 10 per cent, and the Greens went from 8 to 10 per cent. I didn’t hear any of this detail on the TV. Things are changing in the attraction of the several elements of our party system, as I have said before. Both the majors, in Queensland and elsewhere, need to ponder on that shift. It is leading to odd results.

Forward to last Saturday’s Federal by-election. Here the official results are not yet available, but on the face of it Labor secured a swing of about 5 per cent, providing John Alexander and the Liberals with a reasonably comfortable margin of victory. There was such a hullabaloo about Labor’s wonderful candidate, former NSW Premier Kristina Keneally, that the newspaper reader and television viewer might have thought it was all over but the voting from the time her candidature was announced. I do not know the details of the local campaign (again, what I saw were news clips on the TV news), but at a time when the Government is apparently on the nose, and Labor comes up with a bright and attractive, not to say experienced, woman candidate, a five per cent swing away from the Government seems pretty light-on to me. There have been several by-election outcomes with a much larger swing. In fact, Labor in 2008 in NSW suffered swings of double figures against it in four by-elections held on the same day. Maybe there were all sorts of local nuances that led to the Bennelong result, but again, the outcome will deserve a lot of analysis from both sides, notwithstanding that Labor was said to be ‘buoyed with the result’. I think it should have been somewhat worried.

Then there was the Donald. He has become the person, indeed the name, that so many people want to detest. What we see of him comes mostly from American television, and is not, how should I put it, completely fair. But then the President sees the MSM as having campaigned against him in last year’s election, which is by and large true. So he ignores the media, and relies on Twitter feeds. While this is portrayed as somehow loony I saw somewhere that his Twitter audience is over 65 million, and climbing. Others say that is negligible. He did use it effectively to win the election. Joe Hockey, our Ambassador in Washington, pointed out in a speech to the Lowy Institute that not only is the American economy moving ahead, but public perception of the economy is moving the same way. The 58 per cent level satisfied with the growth of the economy and it direction is a higher figure than at any time since about 2002. Mr Trump has taken the USA out of the Paris Accord, and promoted energy reliability and independence as the real goal. That seems to have been popular too — Americans are no more interested in climate change as the be-all and end-all of government policy than are Australians, about 7 per cent in each society, as far as polls show.

It fascinates me that so many Australians are happy to advise Americans, and indeed their President, as to what they and he should do, or not do, yet we complain if other countries show any sort of interest in our politics, and what should happen in our elections or foreign policy. No matter, Mr Trump is the current bogey for very many. If he were not there, someone else would have to fit the bill. He seems to be getting rid of regulations, and that could be done here as well. Our Parliaments generate an immense amount of regulation, as though none of it adds to anyone’s costs, but I’ve written about that too.

I’ll pass over the rainbow marriage day and the tumultuous cheering in Parliament, as though the pollies were somehow responsible for something really good they could have done ages ago but didn’t, for all sorts of really important reasons. I say only that I don’t think there is a real LGBTI community, other than a politically created one.

And that leaves me with dear old Anthropogenic Global Warming. What happened to AGW this past year? The answer is nothing much. We started with an el Nino and are finishing with what is at the moment only a weak la Nina. Everything is much the same. Governments talk about ‘climate change’, but don’t actually do anything about it. The Paris Accord, it seems to be agreed, won’t achieve anything. Some of those who see doom fast approaching have given up on humanity: it just doesn’t have the will to do anything about its self-destruction. Others are furious that people are still talking as though carbon taxes or other regulations are still being proposed, when there is ample evidence that they will neither reduce greenhouse gas emissions nor do any other good. No Minister has as yet pointed to the elephant in the room, though in Germany that moment is getting close because of the difficulty in forming a government that has a single policy on this issue. In the meantime, some banks are refusing to lend money for anything to do with fossil fuels, while the forecasts for the next thirty years all show coal as being still the major source of energy, with oil and gas not far behind. Somebody has got it wrong.

Almost ten years have passed since I wrote my first essay on AGW, and I’ll review those ten years at the appropriate time. For the moment, those who are really worried by all this (that is, the doom-laden) should go to Ole Humlum’s comprehensive www.climate4you website and study the comprehensive data about the last 38 years, along with some older data. At one point (November issue, the December one should be out in a few days) he summarises the data this way:

The average of all five global temperature estimates presently shows an overall stagnation, at least since 2002-2003. There has been no real increase in global air temperature since 1998, which however was affected by the oceanographic El Niño event. Also, the recent (2015-16) El Niño event is probably a relatively short-lived spike on a longer development. Neither has there been a temperature decrease since 2002-2003.

In short, we still dunno, but there’s nothing especially worrying in these data, which come from all five global sets.

This is the last essay for 2017, and I wish all readers a Merry Christmas and a safe and Happy New Year. I’ll be back on deck on 12 January next year.

It is now more than a year since Donald Trump’s electoral victory in the US. Just as The Chicago Herald Tribune was convinced that Governor Dewey, the Republican, would beat Harry Truman in 1948, and said so in a headline (‘Dewey Defeats Truman’), so at least one newspaper, this time in Germany, was convinced that Hillary Clinton had won, and said so, as you can see in the following photo of the page. 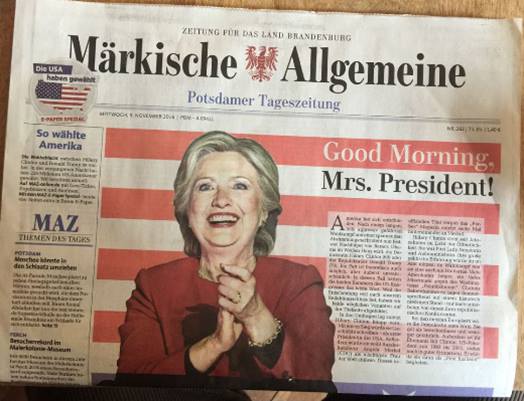